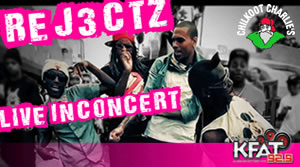 With the holidays over and the new year upon us, youâ€™re probably like the rest of us wondering what to do this weekend. Lucky for you Alaska Rewards has you covered. Operation Morale Boost presents The REJ3CTZ for one night only at The World Famous Chilkoot Charlie’s, Jan 6, 2012. Also scheduled to perform; Casendra, Tayy, Blaack, Chris Starr and ST Rider and as if that wasnâ€™t enough there’s a HUGE surprise in store for all that attend. With todayâ€™s Alaska Rewards offer get 2 tickets to the event for only $30, regularly $50.

Operation Moral Boost is a volunteer committee of families, friends, and supporters of our Armed Forces. They put together care packages and ship to our deployed troops to show them how much we appreciate what they do for our country! A 100% of the proceeds from this deal will go to Operation Moral Boost to help show our troops that Anchorage supports them!

The REJ3CTZ – Mowii, Bounc3, and Pee W33 are from Los Angeles, CA and are known as the underground force behind the new generation of music, style and dance emerging out of the West Coast. They first hit the music scene… in 2008 with their J Hawk-produced club single, “Rej3ct Stomp”. The song describes the “function” scene as well as the original “Jerk” dance known as the REJECT which they created and then which spread like wildfire worldwide, spawning numerous YouTube videos, fresh music and other talented artists. Their lyrical ability was showcased in the Pepsi & Yahoo Music’s ” Mic Pass ” freestyle, and the group was honored at the 2010 E-World Music Awards for emerging digital artists.

The Cat Daddy, which is the group’s latest feat, is a song and dance craze sweeping the internet and the nation, with celebrities such as Chris Brown, Justin Bieber, Willow Smith, and Ellen Degeneres all doing the dance. Recent press on the REJ3CTZ and the Cat Daddy craze include features on TMZ, Los Angeles Times, HipHollywood, DUBCNN, Skinnie Magazine, and more.

The deal is on!

Expires Jan 6 2012
Limit 3 packages per person. Must be 21+ to purchase & attend. Bring voucher with you the night of the event. No Cash back or refunds on this offer.

Alaska Rewards Located at 1225 E Intl Airport Rd, Suite 235, Anchorage, AK. Phone: 907-345-3000. http://www.alaskarewards.com.
Any and all other material herein is protected by © Copyright 2011 Alaska Rewards. All rights reserved.
Alaska Rewards ® and all material pertaining thereto is a Registered Trademark.